skip to main | skip to sidebar

Years ago, a neighbor brought over a big container of chile verde because he made more than his family could eat. I love when neighbors bring food! It was full of flavor and I savored every bite. At that time, I wasn't doing much cooking so I didn't even bother asking for the recipe. The extent of my cooking consisted of three to four ingredients with a five-ingredient recipe being "extreme cooking" for me. LOL! My cooking has definitely improved! :)

While I was recovering from a tonsillectomy, I was pinning tons of recipes from pinterest. I was drooling over each recipe since I was unable to eat any of it. Now that my throat is fully recovered, I've been diving into some of those recipes. Chile Verde is a dish I love to order at Mexican restaurants. I love wet chile verde burritos or chile verde on its own with a tortilla on the side. YUM!

I've never made chile verde so I don't know if this is an "authentic" recipe but what I do know is that I liked my version. I liked it a lot! I invited my Mom and sister over for dinner and they enjoyed it, too. The pork was fork tender and fell apart as I cut into my wet chile verde burrito. I ate the leftover chile verde on its own the next day with a tortilla. It's soupy texture was perfect for a light lunch. Oh, the flavors! Make this sooooooon! 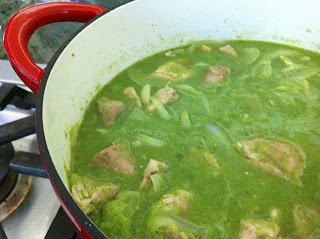 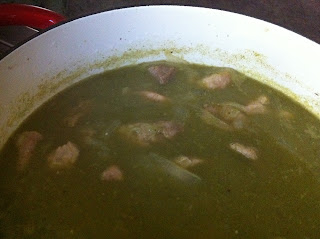 After a couple of hours in the dutch oven.... 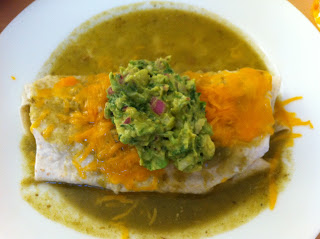 We really love pasta. lt's filling, delicious, and comforting. I serve it with a side of garlic bread and salad and my boys eat it up. They LOVE pasta! Because of Son #2's egg allergy, he has never eaten lasagna because restaurants add egg in the ricotta mixture. I found a recipe for crockpot lasagna and I was all over it. I knew I had to make lasagna for my allergy boy, and because it was a crockpot recipe, I knew I had to give it a try. It was tasty!

In my opinion, the point of a crockpot meal is a one-pot, easy meal but this recipe requires you to cook the ground beef first. The extra step and dirty pan was well worth it.

Source: adapted from Creating Through LIFE
Posted by Gullo Goodies at 8:00 PM 1 comment:

Hummus is really good stuff. It's great on crackers, a slice of bread, with veggies, in a sandwich, or simply on its own. It's loaded with protein and is the perfect snack. I love how I can whip up a batch in no time thanks to my awesome Vitamix. Homemade hummus is delicious and guests are always impressed when I serve it.

Ingredients:
Directions:
Note:  The two garlic cloves gives the hummus a nice garlicky, spicy kick. We love garlic and the amount was perfect!

I've baked sandwich bread several times and I've even tried several different recipes.  Walter's White Bread was our favorite but we definitely have a new favorite now. Move over, Walter, here comes Amish White Bread. Seriously, this bread is tasty! The bread has a nice, tall rise, it's light, fluffy and has a hint of sweet. It reminds me of Hokkaido Soft Bread from Japan. The bread was easy to make since I used my stand mixer. Try this bread. You won't regret it. 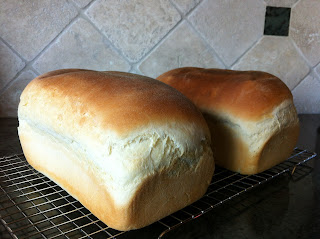 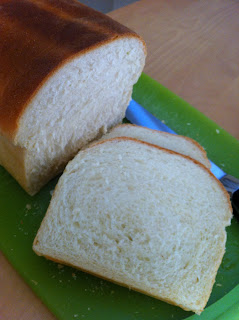 Son #2 with food allergies has never eaten a chicken salad sandwich because of the mayonnaise that's in it. While surfing Pinterest, I found a recipe for chicken salad sandwiches that uses mashed avocado instead of mayo. GENIUS! It's like a chicken and guacamole sandwich. What's not to love about that?! My boys love guac but I wasn't sure how they'd take to chicken and guac in a sandwich. They actually really liked it and ate it up! This was Son #2's first time eating "chicken salad." I love when I can make "firsts" happen for him. It makes me so happy when he can enjoy foods that many of us eat without thinking twice about the ingredients. 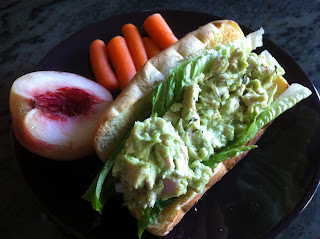 A hot dog bun was the perfect size for our sandwiches.


Source: Adapted from Becoming Betty
Posted by Gullo Goodies at 8:00 PM No comments:

I love a great fried rice and I have yet to taste a delicious fried rice like my grandma used to make. Fried rice always makes me think of my grams and the numerous times I watched her make it. She would use an old wok that had years and years of seasoning cooked into it. The first thing she'd do is fry up chopped bacon. When the bacon was done, she'd scoop it out and place it on paper towels. She'd pour the bacon fat into a glass bowl and reserve it for frying up the rice. With the grease that was left in the wok, she'd scramble up some eggs and set it aside when done. Then came a generous amount of that bacon fat and close to half a stick of butter. She'd heat it up and then throw in the cooked rice and sprinkle some soy sauce over the rice. When the rice was crisp and ready, she'd add the bacon, eggs, and some corn or other veggies and mix it all in. Her rice was flavorful and had the perfect fried rice texture which is so hard to achieve. It was THE BEST! I don't make fried rice with all that bacon fat and butter but it was sooooooo good.......

Because I had leftover filling from making won tons, I used that in my fried rice. My version of fried rice is definitely not like my grams' but it turned out pretty good. Son #2 with food allergies tried fried rice for the first time! He can never order it when we go out because of the egg that's in it and the shared equipment it's prepared on even if the restaurant made it egg-free. Both boys LOVED it! 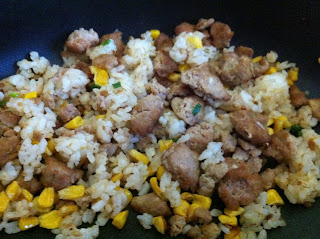 
Directions:
Posted by Gullo Goodies at 8:00 PM No comments:

Because I had leftover won ton wrappers from the "egg rolls" I made the other day, I decided to make won tons for won ton soup. I've never made won tons but figured I should be able to put them together since I've helped my mom make gyoza (Japanese potstickers) a while back. Their filling seems to be the same but they're just shaped differently. I used a filling recipe from my mom and then found a site on Pinterest so I could learn how to do the won ton wrap.

I used an open package of won ton wrappers so I ended up with leftover filling mixture. That wasn't such a bad thing because I cooked up the filling and then made fried rice with it. I'll post that recipe next. :) It was the perfect complement to the won ton soup! I boiled four won tons per person and froze the rest. I'm stoked that I have frozen won tons that I can cook up at a later time. The prep time took a little longer than expected but at least I get two meals out of it. :)

I was a little worried that the won tons would fall apart when I boiled them but they held up. Only two won tons fell apart during boiling. :) 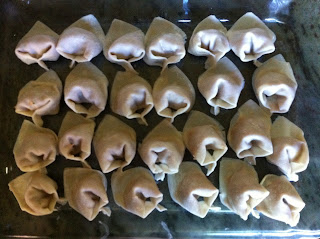 This picture makes me smile.
:)


Notes:  If you have leftover filling, you can make little patties or cook it up like ground beef. I cooked it like ground beef and made fried rice with it. YUM!
You can also fry the won tons if you prefer a crispy appetizer.

Ingredients:
Directions:
Posted by Gullo Goodies at 8:00 PM No comments:

I recently realized that I actually enjoy cooking. I love watching my family eat up the food I make and it makes me feel great when they compliment me on my cooking. I've been cooking up a storm, making healthier choices when making meals, and we're saving money by eating at home. :) There are FABULOUS recipes out there and I look forward to trying as many as I can. The recipes I post are a combination of flavors that my family enjoys and not necessarily "authentic" to the label I've given the dish.

I also post recipes for friends who have kids with food allergies. It took me a long time to figure out how to bake egg-free treats for my son, and now that I've got it nailed, I'm happy to share with others. I modify recipes due to my son's food allergies to eggs, peanuts, tree nuts, and shellfish.I enjoy sharing recipes for egg-free baked goods because the party doesn't have to end at cake time. :)